Getting to Know Your Nose

The nose is a highly complicated structure of the body. It’s not there just to help make a pretty face; it performs two key jobs: breathing and smelling. The nose is designed to allow you to perform both functions at once, and its inner workings are intricately placed.

The nasal cavity can be thought of as a tunnel from the nose to the throat. The space at the front of the nose immediately within the nostrils is called the nasal vestibule, and this cavity is divided in two by 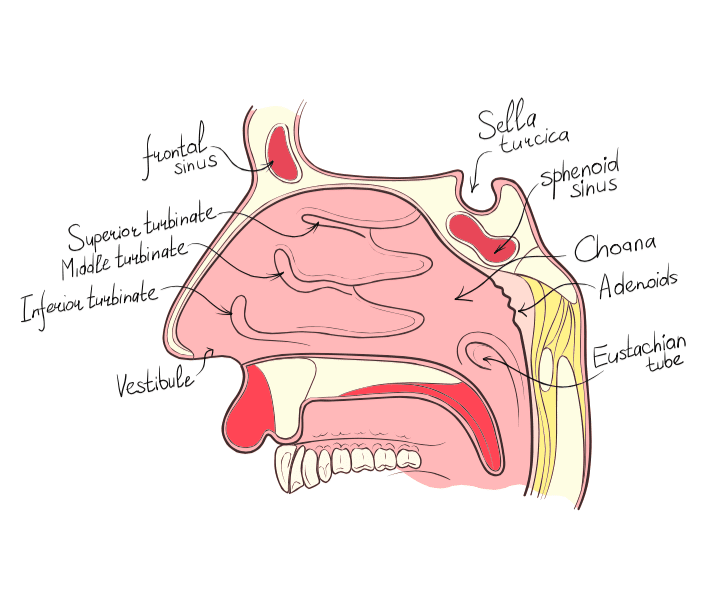 cartilage called the septum. This structure is important because an enlarged septum or a deviated septum (when the septum is displaced to one side) can block the airway, making it hard to breathe. The floor of the nose is created by the hard palate of the roof of the mouth. Behind the vestibule is the nasal concha, which consists of three narrow, curled bones known as turbinates. The turbinates protrude into the breathing passage of the nose and divide the airway into separate passages. Surrounding the concha is the olfactory system that detects smells. As you can see, there are tons of intricately connected parts packed into a small space.

Knowing About Your Rhinoplasty

Nose surgery, also known as rhinoplasty, is designed to improve the aesthetics of the nose while preserving or improving breathing function. Rhinoplasty can correct a misshapen, overly large, or crooked nose and improve the silhouette by fixing bumps and indentations on the bridge and irregularities of the tip. Nose surgery can also reduce the size and improve symmetry of the nostrils.

Rhinoplasty can be performed with either an open or a closed technique. If you and Dr. Diamond decide that an open technique is the best option for you, he will make the incision on the underside of the nose between the nostrils. With the closed technique, he will place the incision inside the nasal passageway. Through the incision, Dr. Diamond will add or remove bone and cartilage. He will adjust the supporting structures and remodel the soft tissues to shape the nose. At the end of the procedure, he will close the incisions and place a splint over the nose. Dr. Diamond is one of the few surgeons who do not use packing in the nose after a rhinoplasty. Therefore, most rhinoplasty procedures with Dr. Diamond are virtually painless during the healing and recovery period.

Because of the intricate nature of the nose, it is important to choose a surgeon who is skilled and experienced with the procedure. Dr. Jason B. Diamond is a facial plastic surgeon double board certified by the American Board of Facial Plastic and Reconstructive Surgery and the American Board of Otolaryngology. He understands the intricacies of the nose and has the artistic ability, technical skill, and knowledge to produce a beautiful nose that is in harmony with the face while also improving the nasal structures so that breathing is maximized. Dr. Diamond also has extensive experience performing both primary and revision rhinoplasties, and he has become world renowned for creating noses that balance his patients’ unique facial features. He uses his skill and artistic judgement to produce exquisitely beautiful or handsome noses free of breathing abnormalities.

If you would like to improve the appearance or function of your nose, please call our Beverly Hills practice at (310) 859-9816 or fill out our online contact form to schedule your consultation with Dr. Diamond today!